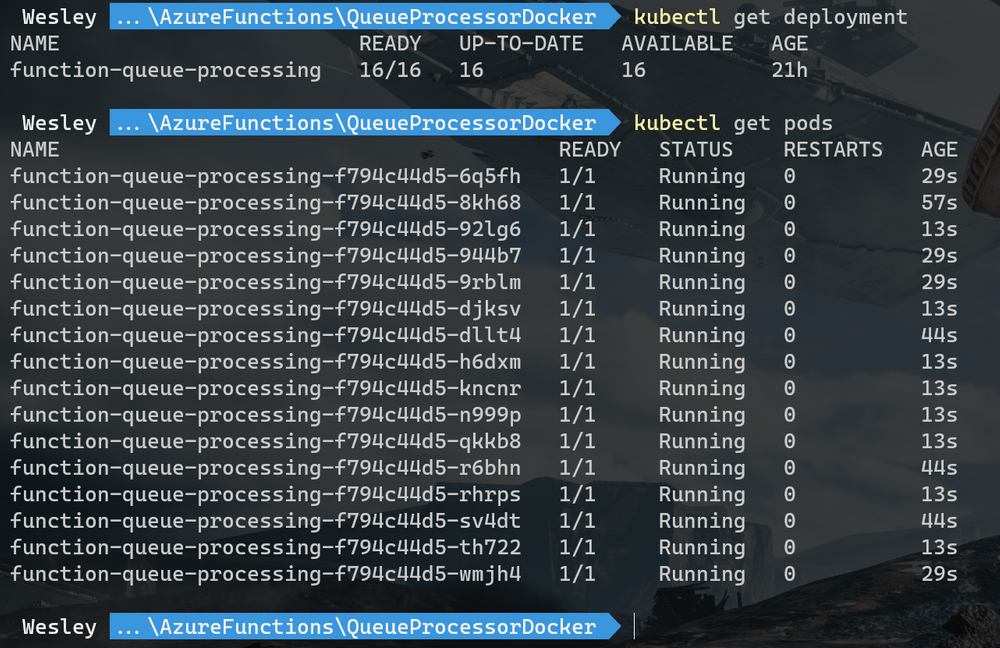 Yes from zero to hero because that's what it felt like when I first set up KEDA and started scaling some Azure Functions on Kubernetes. There are multiple write-ups on this subject but I wanted to learn and start from scratch. I didn't just want to scale, I wanted to process something. I was surprised how easy it was to set up KEDA. I spend more time writing the Azure Function and configuring all the other moving parts.

If you're not looking for the write-up and just want to get started with the code, you can find it here.

To gain more knowledge on how KEDA (Kubernetes Event-driven Autoscaling) operates I was looking for a good demo to build myself and of course show others :)

The infrastructure requires the following components:

Setting up the environment

For the infrastructure parts we need to set up Azure Kubernetes services, a storage account and configure the required secrets.

Azure Kubernetes Service (AKS)
For installing AKS I recommend the Microsoft Docs. You can use the following link (here) for an Azure CLI example or (here) for a tutorial to deploy AKS through the Azure Portal. You can deploy the sample application as provided in the walkthrough to test if your cluster is functioning but it's not a required for getting this solution to run.

Next grab the storage account connection string and note it down (paste is somewhere you can find it).

Once you have the storage account we're going to create a secret in AKS that we can reference in our deployment definition later on to provide the container (and thus the function) with the correct connection string. We'll create the secret as follows:

This will result in the following messages being displayed "secret/storageconnectionstring created".

Image Pull Secret
We also need to create the ImagePullSecret for AKS to grab the container image from the Azure Container Registry.

Now it's time to create the function and deploy the code. Create a directory with the name of your function (QueueProcessorDocker in my case) and run the following command:

This will create the required Dockerfile for our function. Now we can create the function using the following command. We're also adding the Azure.Storage.Blobs package because we need this to create our blob client.

Upon creating the function you will be asked a couple of questions. I went with the following configuration:

Once the function is done. Start Visual Code and open the directory:

Alright. Let's create the code. It's not too big and does the job. We're not looking for a complex function with all features anyone could ever wish for. Instead, we want to see how we can scale with KEDA :)

In the following code (this goes inside your Public static class) we're basically doing a couple of things.

The Function is triggered when a message is stored in the queue. This trigger passes the message to the function as "myQueueItem". That means we already got that part going for us.

Please note you have to configure the name of your queue here (QueueTrigger("messagesfromjjbinks"). If you followed along you have it noted down somewhere :)

We then create blob client and use the connectionString. Additionally we're calling the .CreateifNotExists() method to create the blob container if it doesn't exist. That means if you want to clean up you can just throw it away.

Next we want to store the contents of the myQueueItem in a text file in the blob storage container. We don't want to output to a local file within the function first so we'll grab the stream from memory and then store in in blob storage. We use MemoryStream for that.

Now that we have the function set up let's take at building the container. When the function was initiated, a Dockerfile was generated specific to your function. That means all we need to do is build the image and push it.

Don't forget to run docker login before you push and enter the credentials of the Azure Container Registry.

Optionally if you want to test locally you can run the image as follows:

After running the docker container locally you should be able to see queue messages being processed and stored as a .txt file in the designated blob container.

Creating the YAML file for AKS

We don't have to create the YAML file manually. The Azure Function Core tools provide an option to do just that for you. We're going to do a "dry run" to generate the YAML. You could deploy it directly without the "--dry-run" parameter but we do want to make some additions to the file. You can generate the file as follows:

This will generate a reasonably sized YAML file. We're not going through the file line by line. Let's look at the parts we need to change for our Azure Function to work in combination with KEDA.

First we need to update the secret. Find the secret at the top of the file. The "AzureWebJobStorage" is already populated with a string in Base64, you can leave that as is. We do need to make sure we have a secret set up that the KEDA ScaledObject can use to communicate with the Azure Queue (and determine if it needs to scale). Grab your Storage Account connection string (the one where your queue is living in) and encode it as Base64 (for example through https://www.base64encode.org/).

As a next step we want to update the deployment to contain the right environment variables and the ImagePullSecret. I've made the following changes:

Next we need to set up the ScaledObject. It's already provided by default when generating the YAML but we want to make some additions. If you're looking for documentation on ScaledObjects please check here.

Let's look at some important details.

"scaleTargetRef": This needs to correspond with your deployment. Basically you're saying "Dear KEDA, when you need to scale, do it for this deployment".

"queueName": This needs to correspond with the name of the queue that KEDA will look at. In this example we're using the same queue as we are storing our messages for the Azure Function to process.

"connectionFromEnv": This refers to the Base64 connection string as stored at the start of the generated YAML.

Additionally we have some other options we can modify such as the "minReplicaCount", "maxReplicaCount", "pollingInterval", etc. For demo and testing purposes I have set them really low but in a production like scenario you probably don't want to poll the queue every second :)

Having all that configured we can now deploy the YAML file to AKS.

To check if everything is working, check the deployment.

We now have everything set up! Let's do some testing.

To fill up the queue I'm using some simple code that creates a QueueClient and sends a message of approximately 40KB to the queue. It takes an argument (integer) which will result in X amount of messages in the queue. Code can be found here.

In my example I'm adding 2500 messages to the queue.

Keep in mind that I configured the polling interval and the cool down pretty low, this is for demo purposes and it will scale pretty fast. Tweak the settings for your production scenario accordingly :)

Once the messages start adding we can see that the deployments start scaling and Pods are being added.

Looks like it scaled! If we take a look at the blob storage we can see that the blob container is created and that messages have been added.

Once everything has been processed the deployment goes back to it's original situation:

And that's it. We're scaling stuff using KEDA. Keep in mind that for production scenarios you do want to tweak the variables of the ScaledObject to make the behavior less "jumpy".

If you have questions or feedback, let me know!